My Sojourn in Quilt-land. Discover and fall in love with quilting with me!!!

Thank God it’s Friday! Things are a bit quiet at work so I’m seizing that opportunity to quickly share an update on the decision I made following my last Work in Progress Post Decisions, Decisions… Thanks to everyone that shared their thoughts and suggestions on that post, your lovely suggestions were ringing in my ears as I made my decisions.

Quick recap, I already decided the quilt was going to have a pieced border (I had a rail fence block kinda thing in mind at the time) but then I was torn between having another round of border before or after the pieced border. I also needed to determine what color of fabric to use if I do decide on a border before the pieced border. I was leaning towards another round of black border but I found a floral fabric I considered for a minute (I eventually decided against the floral and I settled on using it in the binding instead, it worked perfectly!)

To summarize the suggestions I got:

I decided to go for black with yellow around the corners (I’d have preferred the yellow a little less obvious probably about 4″ at the most but I think I used 10″) and some where along the line I decided to have a chevron border instead to further show off the zig zag in the center but that involved making loads of HSTs (96 precisely) which was how I revived the Making 32 HSTs at Once Method what a huge help it was to get those HSTs made in record time! Anyway, this is the initial layout after attaching the border and trying out my chevron border 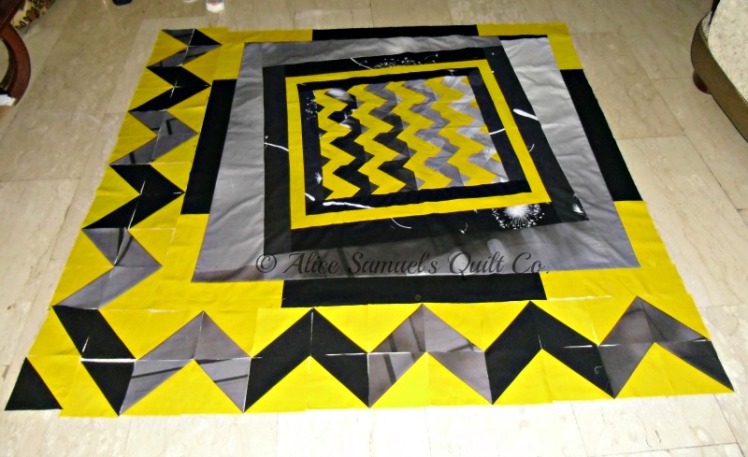 Well it turns out that after laying out my pieced border, I hated the idea of the floating black in the new border, I thought of  leaving the yellow in 2 of the corners such that there is more of the black showing but then I realized that the unfinished size of my pieced border is the same as my pieced block so it was easier to lose that border all together and I ended up with this…ah much better don’t you think?

I finished it off with a final round of gray border and added the last black border just because, unfortunately after quilting and trying to square up the finished quilt, I had to lose the black border, it was the only way to get my quilt looking decently straight! Thanks to all the squishing that happened during quilting:

This Quilt is now labeled and bound and hopefully I will take another trip to the park to get a fairly decent picture to share as soon as I can but in the meantime, I am working on some other projects that are taking priority right now. I am in the process of Quilting and finishing off my Nautical Quilt, I recently completed 2 more baby Quilt (Beauty and the Beast and Teenage Mutant Ninja Turtles) from my stash of Disney Character Panels. I also need to attach the backing and finish off my Queen Size Quilt-As-You-Go quilt…I should be well busy for another 2 weeks.

Thanks for stopping by, have a productive weekend ahead, I know I already have my work cut out for the weekend. What are your Quilty Plans for the weekend? As always, I love your comments so thanks in advance!

20 thoughts on “Decisions, Decisions…here’s my Decision.”

I love to hear from you...leave a reply Cancel reply

This site uses Akismet to reduce spam. Learn how your comment data is processed.

Welcome to my Quilting Adventure! My name is Sola and I welcome you to join me as I find my way through the unexplored path of Quilting in Nigeria. I hope you enjoy looking around and would like to follow me on this adventure. You can find out more about me via the about me tab...